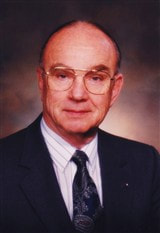 Dr. Gordon Scofield took his boyhood interest in fixing bicycles and cars and carved out a successful career as an academic in mechanical engineering. He recalls his life as an educator as one of the most rewarding experiences throughout his life, and taught for such institutions as the University of Missouri, Michigan Tech and the South Dakota School of Mines and Technology. Dr. Scofield has also served as the president and in other high level positions of the South Dakota Mines Foundation.
​
On December 7, 1941, Dr. Scofield was driving in his grandfather’s new Oldsmobile when they heard news of the attacks on Pearl Harbor. Knowing that being drafted for World War II was imminent, he was able to convince his high school to allow him to graduate early by doubling his workload in order to start going to college at Purdue University. In March of 1942, he started his first year at Purdue University in the V-12 program, which is for students who wish to become officers in the U.S. Navy. He earned a bachelor’s of mechanical engineering in 1946 from the institution. Once he returned to his hometown of De Smet, South Dakota, he began teaching a drafting class. Through this class, he met his future wife Nancy Lou Cooney.

Dr. Scofield then uprooted with Nancy Lou to Missouri, where he began matriculating with a master’s degree at the University of Missouri-Rolla and teaching as a graduate assistant. He earned an MME from the institution in 1949. Around this same time, he began working for the SAE International. Furthermore, Dr. Scofield earned a PhD in mechanical engineering at the University of Oklahoma under a fellowship in 1967. Dr. Scofield was a member of the Board of Directors of ABET from 1994 to 2000. He served as a consultant for the Naval Air Weapons Station China Lake from 1956 to 1971. Dr. Scofield has maintained professional affiliation with a variety of organizations that have aided in his development, including the American Society of Mechanical Engineers, the American Society for Engineering Education, Sigma Xi, The Tau Beta Pi Association, Inc., Pi Tau Sigma, SDSU and the Honor Society of Phi Kappa Phi. He has received recognition throughout his career, including the Excellence in Engineering Education Award from SAE International, an Alumni Achievement Award from the University of Missouri and the Science Faculty Fellowship from the National Science Foundation.